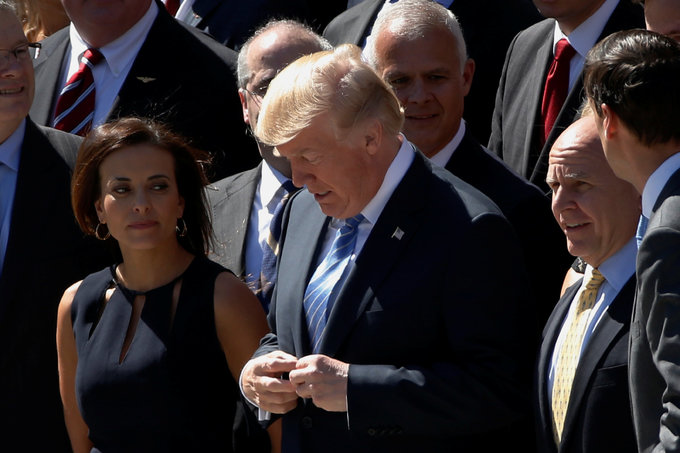 The confirmation came after the U.S. president had appeared non-committal about his planned visits to Vietnam and the Philippines.

U.S. President Donald Trump will visit Vietnam this November to attend the Asia Pacific Economic Cooperation (APEC) summit as part of his regional tour, the White House has confirmed, amid growing uncertainty over Washington’s commitment to Southeast Asia.

That will be the first time Trump has traveled to Asia since taking office. Joined by his wife Melania, he will be stopping in Japan, South Korea, China, Vietnam and the Philippines from November 3 to November 14. Aside from the APEC summit, Trump will be attending the Association of Southeast Asian Nations conclave in the Philippines.

The president’s Asia tour demonstrates “his continued commitment to the alliances and partnerships of the United States in the region,” the White House said in a statement Friday.

The confirmation came after Trump had appeared non-committal about his planned visits to Vietnam and the Philippines two weeks ago. To many analysts, if he canceled those two trips, his administration would be another step closer to retreating from a region that China is salivating at marching on with its expansionism stratagem.

A March survey by the ISEAS-Yusof Ishak Institute in Singapore that polled government officials, business representatives, academics, and journalists in Southeast Asia found that around 75 percent of the respondents saw China, not the U.S., as the most influential player now and for the next decade. Two-thirds of respondents also viewed the U.S. less favorably.

The six-day APEC summit will open on November 6 in the central Vietnamese city of Da Nang, with other world leaders including China’s Xi Jinping and Russia’s Vladimir Putin expected to attend.

It remains unclear if Trump’s trip will also entail an official state-level visit to Vietnam. Even if it does, “I expect you will not see the same kind of rockstar treatment that President Obama received, largely because this administration has not shown nearly the same level of attention for Vietnam in particular or Southeast Asia in general,” Gregory Poling, director of the Asia Maritime Transparency Initiative at the Center for Strategic and International Studies, said.

Vietnam is Southeast Asia’s biggest exporter to the U.S. Right after becoming president, Trump nixed the Trans-Pacific Partnership (TPP), a mammoth U.S.-led trade deal whose 12 members make up nearly 40 percent of global GDP, dismantling the signature policy of his predecessor Barack Obama, who visited Vietnam in May 2016.

The scrapping of the TPP “did much to unnerve the Vietnamese leadership and cast a lot of doubt on whether the U.S. was going to lead a norms-based order in the Asia Pacific,” Zachary Abuza, a Southeast Asia analyst at the National War College in Washington, said. “That one administration does not live up to the commitments of past administrations makes the U.S. look very unreliable as a security partner.”

Last May, Vietnam’s Prime Minister Nguyen Xuan Phuc paid an official visit to the White House, beginning a series of Washington visits by Southeast Asian leaders who were seeking to gauge Trump’s policies toward the flashpoint South China Sea, tensions over which have pitted Beijing against its smaller neighbors in the region.

Despite repeated assurances from the White House that fundamental U.S. interests in Asia-Pacific have not changed, no outline of a U.S. policy for Southeast Asia has appeared, analysts say.

“More than eight months have passed and no Trump National Security Strategy has emerged,” Carl Thayer, a longtime analyst of regional security and emeritus professor at the University of New South Wales, said.

“It is unclear how the Asia-Pacific, or the Indo-Pacific Region, will fit into Trump’s three priorities – defeating the Islamic State, halting North Korea’s nuclear proliferation and renegotiating trade agreements,” Thayer said.

“Because no clear foreign policy strategy has emerged it is unclear how the Trump administration will manage two seemingly contradictory objectives: enlisting Chinese cooperation over North Korea while opposing excessive Chinese claims to the South China Sea.”

China claims almost 90 percent of the potentially energy rich ocean despite competing claims from Vietnam, the Philippines, Brunei, Malaysia, and Taiwan. Vietnam has remained a vocal opponent of China’s claims.

In 2011, as China began flexing its muscles in the troubled waters, which Vietnam refers to as the East Sea, President Barack Obama announced America’s vaguely assertive plans for a strategic “pivot” or “rebalancing” toward the Asia-Pacific region.

But in Vietnam, where the historic antagonism toward China has fueled a perception that anything that can hurt the giant to the north can only be good, the Obama administration’s tough talks on China were already enough to make headlines in Vietnamese-language news outlets.

The Trump administration has on the one hand stopped using the terms “rebalance” or “pivot”. It on the other has given priority to shoring up the U.S. alliances with Japan and South Korea both bilaterally and trilaterally and enlisting Chinese cooperation in dealing with North Korea.